Japan’s ‘Waste Not, Want Not’ Philosophy

How Lincoln's Embrace of Embalming Birthed the American Funeral Industry
The Fight Over Water
4 Myths About Mass Shootings
Calling it a ‘War on Science’ has Consequences
Coronavirus: Country Comparisons Are Pointless Unless We Account for These Biases in Testing
By ACSH Staff — November 1, 2022

This philosophy has deep religious and cultural roots, from monsters and meditation to Marie Kondo’s tidying up. This article by Dr. Kevin Taylor, Director of Religious Studies and Instructor of Philosophy, University of Memphis is re-posted here courtesy of The Conversation.

In the Public Domain

The word “waste” is often frightening. People fear not making the most of their time, whether at work or at leisure, and failing to live life to the fullest.

Warnings against waste run especially deep in Japanese culture. Many Americans are familiar with the famous decluttering technique of organization guru Marie Kondo, who wrote “The Life-Changing Magic of Tidying Up.” Travelers to Japan may hear the classic expression “mottainai,” which means “don’t be wasteful” or “what a waste.” There are even gods, spirits and monsters, or “yokai,” associated with waste, cleanliness and respect for material goods.

As a scholar of Asian philosophy and religions, I believe the popularity of “mottainai” expresses an ideal more than a reality. Japan is not always known for being environmentally conscious, but its anti-waste values are deeply held. These traditions have been shaped by centuries-old Buddhist and Shinto teachings about inanimate objects’ interconnectedness with humans that continue to influence culture today.

The idea of avoiding waste is closely tied to ideas of tidiness, which has a whole host of spirits and rituals in Japanese culture. Fans of the famous animator Hayao Miyazaki may recall the cute little soot sprites made of dust in his films “My Neighbor Totoro” and “Spirited Away.” Then there’s the ceiling licker, “tenjōname”: a tall monster with a long tongue said to eat up the filth that accumulates in hard-to-reach places.

“Oosouji,” or “big cleaning,” is an end-of-year household ritual. Previously known as “susuharai” or “soot sweeping,” it is more than a chance to tidy up. The rite is believed to expel the negativity of the previous year while welcoming the Shinto god Toshigami: a major deity, considered grandson of the gods who created the islands of Japan – and who brings good luck for the new year.

Out with the defiled and old, in with the purified and new. 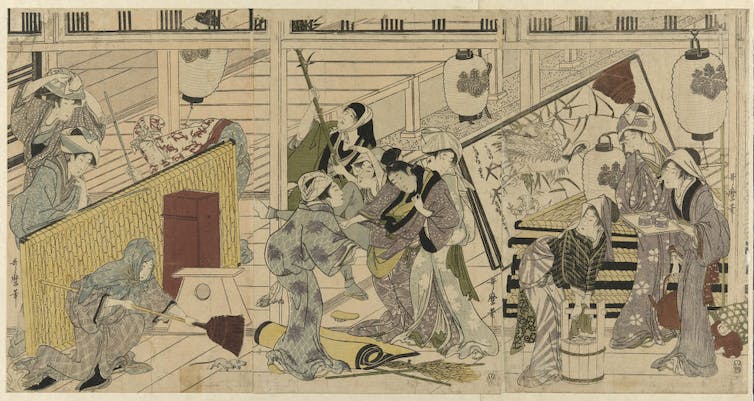 A scene of housecleaning in preparation for the new year by artist Kitagawa Utamaro in the late 1700s. Heritage Art/Heritage Images via Getty Images

Revenge of the tools

There are countless varieties of monsters in Japanese folklore, including “yokai.” As Japanese folklore scholar Michael Dylan Foster points out, the category “yokai” is nearly impossible to define, because the meaning is ever-changing – and many yokai themselves are shape-shifters.

For instance, “yurei” are truly terrifying, vengeful ghosts. But another category of yokai is the living, shape-changing “bakemono” – including the mischievous “tanuki,” a raccoon dog, and “kitsune,” or fox, often depicted in statues guarding shrines.

One special class of yokai is known as “tsukumogami,” referring to animated household objects. This concept originates in Shinto, which literally translates as “the way of the gods,” and is Japan’s native folk religion. Shinto recognizes spirits, or “kami,” as existing in various places in the human world: from trees, mountains and waterfalls to human-made objects.

It is said that when an object becomes 100 years old it becomes inhabited by a Shinto spirit and comes to life as a tsukumogami. The “Tsukumogami-ki,” or “Record of Tool Specters,” is a text written sometime between the 14th and 16th centuries. It tells the story of how just such objects, already 100 years old and possessed by kami, were cast out in the trash after the annual housecleaning ritual. These animated household objects took offense at their casual disregard after years of loyal service. Angered at the perceived disrespect, the tool specters went on a rampage: drinking, gambling, even kidnapping and killing humans and animals. 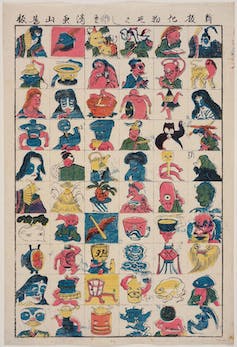 A poster of monsters by Japanese artist Utagawa Shigekiyo, published in 1860. Museum of Fine Arts Boston

Despite the Shinto elements, this is not a Shinto story but a Buddhist one. The animated household objects’ frenzy comes to an end when Buddhist priests intervene – meant to convince the audience that Buddhist practices were more powerful than local spirits associated with Shinto. At the time, Buddhism was still cementing its influence in Japan.

If the “Tsukumogami-ki” is Buddhist propaganda, it is also a cautionary tale. The cast-aside objects lash out in anger for being treated without a second thought.

Reverence for objects has persisted throughout Japanese history in many forms. Sometimes this is for practical reasons, and sometimes more symbolic ones. The samurai sword known as the “katana,” for example, was often considered the soul of the warrior, symbolizing devotion to the way of the warrior, or “bushido.” In a more everyday example, cracked teapots are not discarded but rather repaired with gold in a process called “kintsugi,” which adds an asymmetrical beauty like a golden scar. 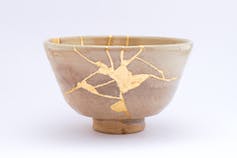 A bowl restored with gold along the cracks, using the traditional ‘kintsugi’ restoration technique. Marco Montalti/iStock via Getty Images Plus

This reverence also persists in the form of funerary services for a host of objects considered deserving of respect, such as doll-burning ceremonies performed at Shinto shrines and Buddhist temples. No-longer-wanted but not-unloved dolls are collected so that the spirits within can be honored and released before the end of their lives. A similar practice exists for artisans’ sewing needles, which are put to rest with a memorial service.

The roots of these attitudes toward material things are therefore religious, practical and psychological. As a Japanese philosophy of waste, “mottainai” keys into Zen Buddhism’s emphasis on emptiness: minimalism to empty the mind and bring insight.

This desire to show respect also stems from Buddhist beliefs that all things, living or not, are interconnected – a teaching called “pratītyasamutpāda.” It’s closely tied with conceptions of karma: the idea that actions have consequences, especially moral consequences.

In short, Buddhism acknowledges that things shapes people, for better or worse. Unhealthy attachment to objects can manifest in different ways, whether it be the perceived need to buy an expensive car or reluctance to let go of unneeded items.

But that does not necessarily mean throwing away everything. When we are done with material goods, we don’t need to simply cast them into the trash to fill up landfills or pollute the air and water. They can be given a dignified send-off, whether through reuse or responsible disposal.

Failing that, the story in the “Record of Tool Specters” warns, they may come back to haunt us.

This article is republished from The Conversation under a Creative Commons license. Read the original article.

Big Fears Little Risks Trailer
Why Do Books Smell? In the Know with 'Dr. Joe'
A Conversation Between ACSH and Great.com
END_OF_DOCUMENT_TOKEN_TO_BE_REPLACED

New Drug Names: A Study in Madness
Why Does Drinking Cause Cancer?
People Worry Hysterically About Low Risk Carcinogens. And Then They Drink
Marijuana and Kids Don't Mix. An Interview with Dr. Roneet Lev
The J-Man Chronicles: In Search of the Elusive Snake Clitoris
END_OF_DOCUMENT_TOKEN_TO_BE_REPLACED