Chemistry Can Help Roast the Perfect Coffee Bean
Celebrate Oktoberfest with Beer Chemistry
Chemists Can Detect the True Animal Source of Leather
How Oxygen Can Enhance or Destroy White Wine
Cheese Chemistry: Is Your Parmesan Legit? 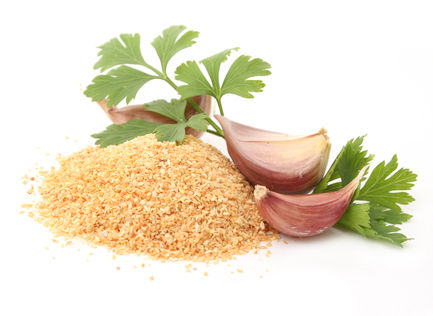 Cooking should be thought of as edible organic chemistry. For instance, what toasted bread, grilled steak, and crème brûlée all have in common is the Maillard reaction, a chemical process that combines sugars and amino acids into delectable, brown goodness.

Because such foods consist of a large variety of different molecules, it is largely unknown what compounds are present in cooked food after the Maillard reaction is complete. So, a team of researchers from Technische Universität München set about characterizing the molecules that are created when garlic is roasted.

To simplify their analysis, the researchers first used two of the main compounds found in garlic: glucose (a sugar) and S-allyl-L-cysteine (a slightly modified version of the sulfur-containing amino acid cysteine). They combined these compounds and heated them for one hour at 100 degrees C. in an oven, after which the reaction products were isolated and analyzed using standard chemistry techniques. The team discovered nine major molecules.

When given to a panel of volunteers, seven of the compounds were judged to be bitter; two of them were deemed tasteless, but one of these had a property known as "kokumi," which means it enhances other flavors.

With this newly acquired knowledge, the authors fried both garlic and garlic powder. Then, they isolated and quantified the nine molecules that they had previously detected and characterized. Only two of the nine showed up in appreciable concentrations, and only in fried garlic powder, not garlic. (See chart.)

As shown, only compound #6 and #9 were created in concentrations great enough to surpass the taste threshold determined by the volunteers. In roasted garlic powder, compound #9 likely provides a perceptible bitter taste, while compound #6 enhances the other flavors found in food.

So, the Maillard reaction does not appear to produce much of the flavor associated with roasted garlic or garlic powder. Those flavors may be due to other reactions or are intrinsic to garlic itself. However, the presence of a molecule that strongly enhances the flavor of other molecules may explain why garlic powder is such a commonly used ingredient in cooked foods.

A Farewell to ACSH
How to Fight a Disinformation Campaign
Building Trust: How the Church Can Encourage COVID Vaccines
Journalists Regurgitate 'The Monsanto Papers'
No, COVID mRNA Vaccine Won't Cause Alzheimer's or Prion Disease
END_OF_DOCUMENT_TOKEN_TO_BE_REPLACED

Big Fears Little Risks Trailer
Why Do Books Smell? In the Know with 'Dr. Joe'
A Conversation Between ACSH and Great.com
END_OF_DOCUMENT_TOKEN_TO_BE_REPLACED

New Drug Names: A Study in Madness
Why Does Drinking Cause Cancer?
People Worry Hysterically About Low Risk Carcinogens. And Then They Drink
Marijuana and Kids Don't Mix. An Interview with Dr. Roneet Lev
The J-Man Chronicles: In Search of the Elusive Snake Clitoris
END_OF_DOCUMENT_TOKEN_TO_BE_REPLACED