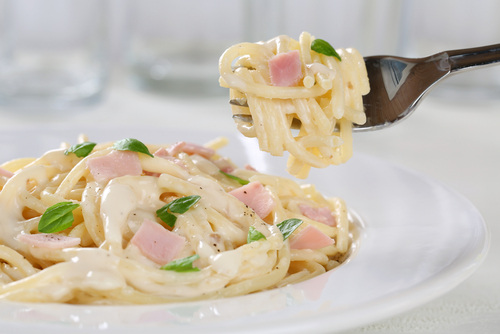 In recent years pasta gained a bad reputation: it will make you fat. Obviously you could insert any food and get the same result, if you eat enough of it. So how does it happen that certain foods get called out and stick in the minds of the public?

Usually a suspect epidemiology paper will get a bestselling New York Times diet book written about it (wheat, sugar) and then food pundits like Marion Nestle will write a book talking about a giant corporate conspiracy to promote this new harmful food and state that anyone denying it is a corporate shill. And pretty soon a whole lot of people will limit its consumption thinking that is a magic bullet for health.

One group of epidemiologists took a more critical look at carbohydrates while still endorsing a popular recent gimmick: the Mediterranean diet. As they write in Nutrition and Diabetes, they examined survey results of over 23,000 people recruited in two large epidemiological studies: Moli-sani and INHES (Italian Nutrition & Health Survey), conducted by their own Department of Epidemiology, I.R.C.C.S. Neuromed in Pozzilli, Italy. They found that pasta was not associated with an increase in body weight, it was just the opposite. Pasta was instead correlated to a healthy body mass index, lower waist circumference and better waist-hip ratio.

How is that possible? In epidemiology, you could claim anything is possible in studies of 1,000 people but with 23,000 it's more rigorous and can't be dismissed on population sample. Pasta has long been a part of the Italian "Mediterranean diet." That population doesn't eat just fish and nuts, and so it is no surprise that Italian scientists discovered that a fundamental component of Italian Mediterranean tradition didn't suddenly make people obese.

It may just be that pasta -- and carbohydrates in general (certainly now including sugar) -- were just victims of bad press.

Investigation: Scientology-Linked Lawyers Spread Lies About Vaccines and GMOs, Attack Scientists
ACSH, Paul Thacker, and His 'Thacker of Trolls'
Why a Vaccine Can Provide Better Immunity than an Actual Infection
Perchlorate in Drinking Water
Concussion Prevention: Sorting Through the Science to See What's Sound
END_OF_DOCUMENT_TOKEN_TO_BE_REPLACED

Big Fears Little Risks Trailer
Why Do Books Smell? In the Know with 'Dr. Joe'
A Conversation Between ACSH and Great.com
END_OF_DOCUMENT_TOKEN_TO_BE_REPLACED

New Drug Names: A Study in Madness
Why Does Drinking Cause Cancer?
People Worry Hysterically About Low Risk Carcinogens. And Then They Drink
Marijuana and Kids Don't Mix. An Interview with Dr. Roneet Lev
The J-Man Chronicles: In Search of the Elusive Snake Clitoris
END_OF_DOCUMENT_TOKEN_TO_BE_REPLACED