What Does Organic Really Mean? Ask a Chemist

ACSH Explains: What Does 'Organic' Really Mean?
Why Stuff Explodes
Vitamin C Conundrum for the Organic Crowd
Everything You Eat is Made of Chemicals
Natural Flavors Are More Radioactive Than Artificial Ones. 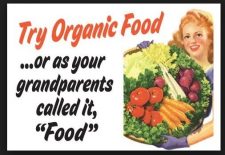 What do toenail clippers, submarine hulls and waffle irons have in common?

If this sounds stupid  (if?), check this out: 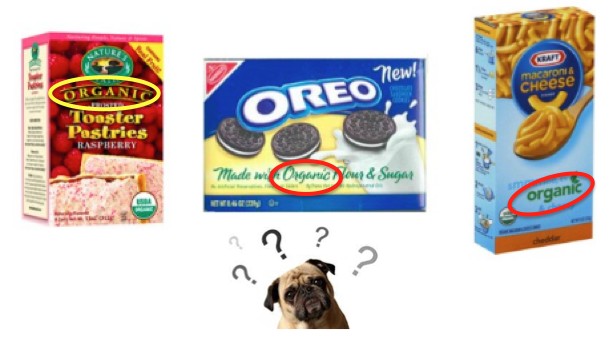 No,  I'm not making it up. Three foods, which don't exactly represent the epitome of health and wellbeing — "Pop Tarts," Oreos, and Kraft Mac and Cheese — are now organic. It's not that any of these tasty delights, when eaten in moderation, is going to put you in an early grave, but if you think that simply because the "magic word" now appears on the package that you will exist for one more healthy second on Earth, you are deluding yourself.

And, you are not alone. It would appear that market research has reached that conclusion that many people will simply not buy anything that is not organic. So, let's make everything organic! If this sounds crazy ...

That's because the worship of things organic has reached the point where the following items are not part of a Saturday Night Live skit. These are real. All of them can be bought online. 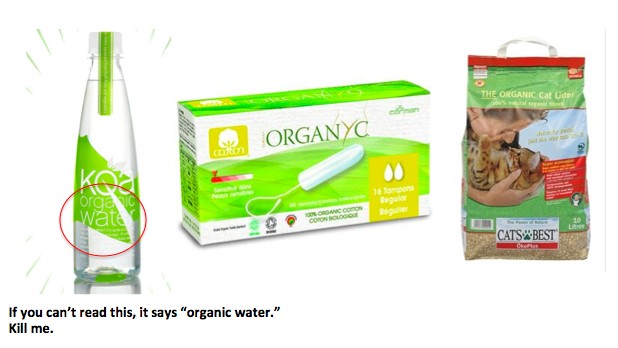 Organic water, tampons and cat litter. If this doesn't illustrate the level of madness that this "movement" has become, just wait a month or two. I'm betting that it will get worse, although, I can't imagine how at the moment.

Given the way the word organic is thrown about, I thought it might be interesting to examine where the term originated, how it morphed into food and consumer goods, and, saving the best for last, a rather funny paradox, in which the term actually contradicts itself.

First, let's look at the origin of the word. In the 1700s, chemists coined a term which is surprisingly on target, even three centuries later. At that time, scientists believed that there were two types of substances — those that were found in, and derived from, living organisms, and those that were not. Thus, the original definition of the word organic is: “the condition of being ordered as a living being.”

The 17th century chemists were not that far off. Carbon is the essence of life. Every life form, as well as the molecules that make life possible all contain carbon, for example, proteins, DNA/RNA, and amino acids. Since that time, the meaning of organic has been expanded.

The modern definition of organic chemistry is: the branch of chemistry that encompasses the study of any chemical that contains the element carbon, regardless of its source. (There are a handful of exceptions, such as carbon dioxide, and sodium bicarbonate, which are considered to be inorganic.)

OK, so they didn't get it entirely right, but that was 300 years ago, and scientifically, they were still well ahead of where homeopaths are today. (So were the Flintstones.)

The mismatch between the chemical use of the word, and all other uses, creates a number of paradoxes, some of which are rather amusing.

For example, here are some chemicals that are permitted for use in organic farming:

What do these have in common? Chemically, not one of them is organic.

What do these have in common? Chemically, every one of them is organic. Which brings up an interesting paradox:

If you are any more confused than when you first read this, don't feel bad. That was sort of the point.

New Drug Names: A Study in Madness
Why Does Drinking Cause Cancer?
People Worry Hysterically About Low Risk Carcinogens. And Then They Drink
Marijuana and Kids Don't Mix. An Interview with Dr. Roneet Lev
The J-Man Chronicles: In Search of the Elusive Snake Clitoris
END_OF_DOCUMENT_TOKEN_TO_BE_REPLACED

Big Fears Little Risks Trailer
Why Do Books Smell? In the Know with 'Dr. Joe'
A Conversation Between ACSH and Great.com
END_OF_DOCUMENT_TOKEN_TO_BE_REPLACED

New Drug Names: A Study in Madness
Why Does Drinking Cause Cancer?
People Worry Hysterically About Low Risk Carcinogens. And Then They Drink
Marijuana and Kids Don't Mix. An Interview with Dr. Roneet Lev
The J-Man Chronicles: In Search of the Elusive Snake Clitoris
END_OF_DOCUMENT_TOKEN_TO_BE_REPLACED